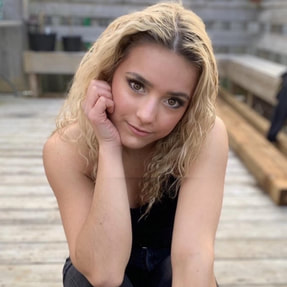 Jazmin is a lifelong triple threat who began competing at the age of 3, and has been continuing her passion through teaching for 7 consistent years. Under the direction from Artistic Director, Amanda Dubrieul, Jazmin has not only accomplished many dance awards, scholarships and has gained opportunities in Professional Productions, background work on TV sets and music videos, her prestigious training over the years has attained her strength in capability as an admirable teacher, performer, rehearsal master as well as a choreographer.

Jazmin began studying under Step With Style Dance Productions at the age of 8. Her training has included many well known instructors in Ontario. She has had the opportunity to train under Amanda Dubriel, Sasha Litvak, Almitra McMillian, Tressa Wilson, Tamara Freethy, and Mike Cota, for 9 years, including her opportunities to work with Toyko, Debbie Wilson, Devon Perry, Jayde Whitney, Thearesa Howard, Joe Perez, and Twitch. Her training has consisted in the genres of Ballet, Jazz, Tap, Acro, Hip Hop, Breakdance, Salsa, and Contemporary. Jazmins appreciation for the arts expanded her horizon, training also in drama and vocals. Alongside her dance training, her instruction held by top drama and vocal educators, including Dimitri Machnine, Kristina Uranowski, Carol Forest, Peter Skylar and Amy Helsby, has guided her to her triple threat status.

Alongside her training, Jazmin has had many opportunities within the performance industries. Starting in 2008, Jazmin began performing in Risa Productions “Aladdin” and again in 2013. Continuing her performance path, Jazmin has been seen as an ensemble in Step With Style Dance Productions Nutcracker; Snowflake and Spanish dancer, Maleficent; “Dark Horse” dance scene, Charlie’s Angels; “Motorcycle scene”, as well as one of the youngest ensembles with Stepanova Ballet School as a Party girl, Mouse, and Bom Bom Girl in the 2009 performance of the “Nutcracker”. Her lead roles consist of Captain Rick Flag in “Suicide Squad”, and The Bearded Lady in “The Greatest Showman” conducted by Step With Style Dance Productions. Jazmin has also been recognized for her background work in “Heroes Reborn” starring Ryan Guzman, “Degrassi Next Class” and a backup dancer and singer with Marlowe and the Mix which included performing in “The Great Camp Adventure” benefit for Sick Kids Hospital, “Raise Your Voice” Children’s benefit, and has performed alongside Marlowe Stone and Randy Starr at Nathan Phillips Square and Centre Island in Toronto.
​
Through her experience within and outside the studio walls, Jazmin has been educated under the teaching practices of Amanda Dubrieul as an assistant and rehearsal master beginning at the age of 12, with their students winning countless awards, scholarships and top overalls. These practices have allowed Jazmin into furthering her choreographing and teaching career with recognized routines in Hip Hop and Jazz genres, including choreographing Step With Style Dance Productions Junior dancers finale “We are Family” with over 30 students.
Jazmin continues her passion of dance, and has been committed to her choreographing as well as teaching. She strives to motivate, teach young minds and souls the art of dance, and continuously looks forward to being a part of young dancers dreams and love for dance.