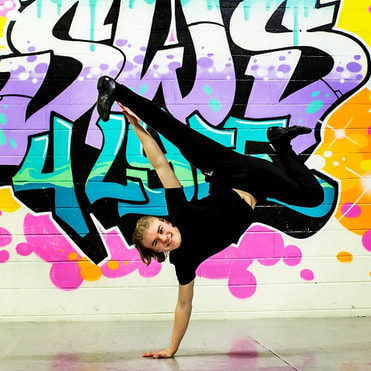 Billie Burke is an incredible talent and inspiration to all boys around him! A diamond in the rough, Billie’s intense work ethic has had him rise through the ranks - from Recreational, to Part Time, to Full-time and on to motivating instructor in just a few short years!
Billie began his physical talents with training in gymnastics at Supernova (2009-2011) then on to one of Canada’s Olympic training facilities - Gemini Gymnastics (2011-2013).
Once Billie had surpassed the male opportunities in these gymnastics facilities he moved on to SWS and up the ranks - all the way to the beloved instructor he is today.
Training under the direction of Joe Perez and Mike Cota, Billie’s love and skill for Breakdance/Hip Hop grew to award winning results!

Through the years Billie had many male and female role models guide him in his performance training. He continues to push himself outside of his box and try new elements including training and competing in multiple genres/styles.

As a member of the SWS faculty Billie participates annually in the E.L.D. - Educating Leaders of Dance program and continues to assist other accomplished coaches along with his developing his own lesson plans with constant aspirations to become the best instructor/performer he can be.

Billie is an absolute professional in the classroom and on the stage! He has been cast in lead roles/characters in several productions. He is most proud of his performances as: Killer Crock in “Suicide Squad, Phillip Carlyle / Zac Efron in “The Greatest Showman” and most recently as Justin Timberlake in “Madonna”- a tribute.
As a competitive performer, Billie has earned much recognition and awards for multiple genres in both the GTA and the Mayan Riviera.

Parents couldn’t ask for a better role model for their children! We are so proud to also share that in addition to being an excellent dancer/instructor Billie has also earned honours, student of the month accreditations, the Rita Headley Arts Award, he has been class Valedictorian, Hip Hop Dancer of the year 2019, and more!
Billie’s hope is that he can use his knowledge and experience to motivate all students but boys in particular to believe in themselves and rise to the top!