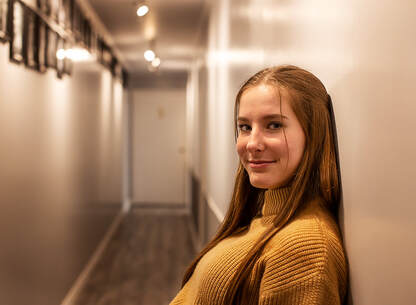 Kristina Machnine began her artistic and physical training as a gymnast with Gemini Gymnastics.
At that time, she was influenced by many fellow Olympian gymnasts and trained with National provincial level coaches such as Elena Davydova and Kathleen VanGraft. Kristina soon joined the competitive gymnastics team, however dancing was where her heart was.

Throughout her competitive career Kristina achieved awards such as; 1st overall soloist in numerous genres such as Acro, Contemporary and Open and earned numerous scholarships to attend programs across Ontario namely; Canadian Dance Expo & the Move Dance Convention.
Among her awards Kristina has also been chosen for roles in multiple full length production shows such as: “Suicide Squad”, “The Greatest Showman”, “Maleficent”, “The Angels” and “Madonna”.

Kristina attributes these accomplishments and successes to the endless amount of opportunity that SWS provided her and is excited to share this experience and more with her future students as a member of the SWS “Dream Team”.